Who wants to buy an Airport?

Durham Tees Valley Airport has been put up for sale.

Peel Airports Limited has announced it is to sell its majority shareholding that it holds in the airport, based in County Durham.

It said the airport “no longer fits within the company’s strategic plans for its portfolio of airports”.

The airport will continue to operate as normal during this process for passengers due to travel over the coming weeks and employees based there.

Prime Minister David Cameron said: “The key thing about the future of Durham Tees Valley Airport, which is a vital airport, is not necessarily who owns it, but is it being invested in? Is it being expanded? Is it working well? That is the key question.” 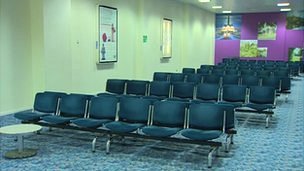 The Conservative MP for Stockton South James Wharton, who has campaigned to see the airport’s future secured, has already discussed the situation with Transport Minister Theresa Villiers.

Mr Wharton said: “I have explained to Theresa Villiers the importance of Teesside airport to our sub-regional economy and my concerns about any sale that could eventually lead to closure.

“She, and the Department for Transport, are now aware of the situation and will be following matters closely.

“It is time for new investment and for the future success of this important facility to be taken seriously.”

Middleton-St-George Councillor Doris Jones said: “People want to see a vibrant and successful airport and will be worried that it could become an industrial estate or even housing.

“We need urgent assurances that this is not going to happen.

“What happens to this airport has a significant impact in Middleton-St-George, we need to ensure things are handled in the right way to protect residents and the economy in this part of the region.”

PricewaterhouseCoopers (trading as PwC) have been appointed to actively seek a buyer for the 75% of the shares and to oversee any subsequent sale process.